The Borgo Terminal Containers Company was founded in 1979 at Borgo Fornari ( in the hinterland of Genoa) in a area of about 5000 square maters. The company operated in warehouse , movement, repairing and transport of containers. From year to year, the company has modified it's sphere of activity, in according to the present- but above all probable – evolution in the Genoese shipping. In 1982 it happens a first, substantial change ;the company removes to the Erzelli hill (Monte Croce), in an area of about 10.000 square meters, and changes the official name; from now on the new name will be Nuovo Borgo Terminal Containers, simply known as "Borgo" Strives the company strive to expand, and so in 2000 it becomes larger, obtaining in concession ,within the Genoa Sampierdarena Port, a state property area of about 5000 square meters : a little but efficient aim that permits to improve customer service with the aid of a railway siding. After several vicissitudes related to the transfer of the Technological Polo to the Erzelli hill, Nuovo Borgo Terminal Containers opens its new headquarters in an area of about 25.000 square meters, beside the Genoa Voltri Port, near the Vte cranes. In 2019 Nuovo Borgo Terminal Containers Srl makes a very important choice, close NBTC Porto and open a new area near NBTC Voltri, the name will be NBTC Mare. After the restoration works , this area will have over 20000 mq for own clients,and with NBTC Voltri will be a valid response to the demand for services of containers logistic in the Genoese shipping view. NBTC has recently realized a co-financed plan in the ambit of the POR CRO of The Liguria District 2007-2013 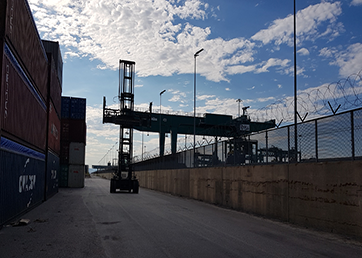